Note: This was originally posted in the Barely Uninteresting Blog .

On March 12, 2011, at approximately 4:30 in the afternoon, I pulled up with a large U-Haul truck in front of a little ranch home in east Longmont, Colorado with three very agitated parrots.

Note to the sane: Never travel in a U-Haul truck with three parrots.

This began the latest adventure in my life: Returning to the area where I grew up to try and find a way to breathe new life into me.

I was listening to NPRĺs All Things Considered on December 19, 2010 and was struck by a story: Finding Simon And Garfunkelĺs ĹAmericaĺ In Saginaw, Mich . 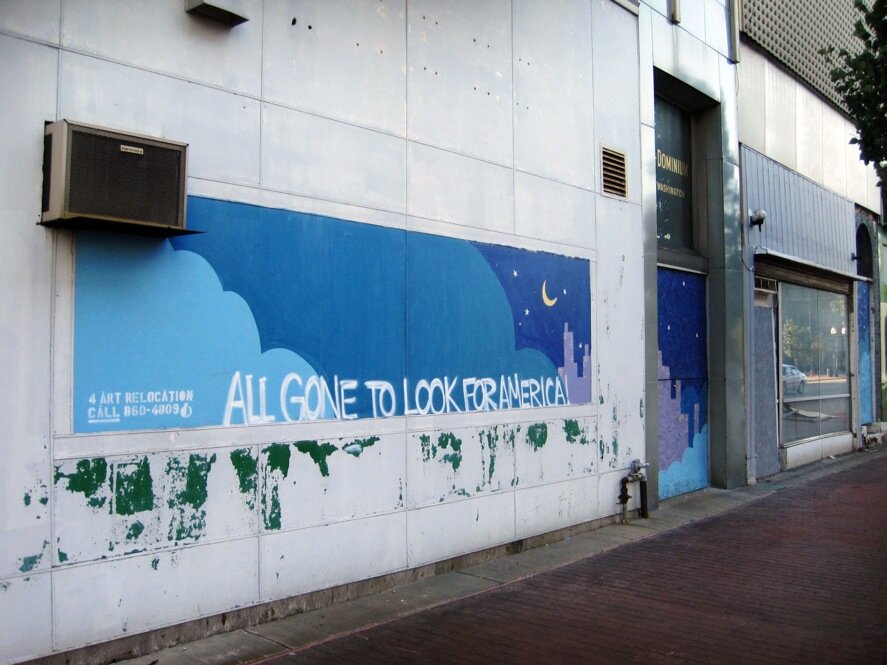 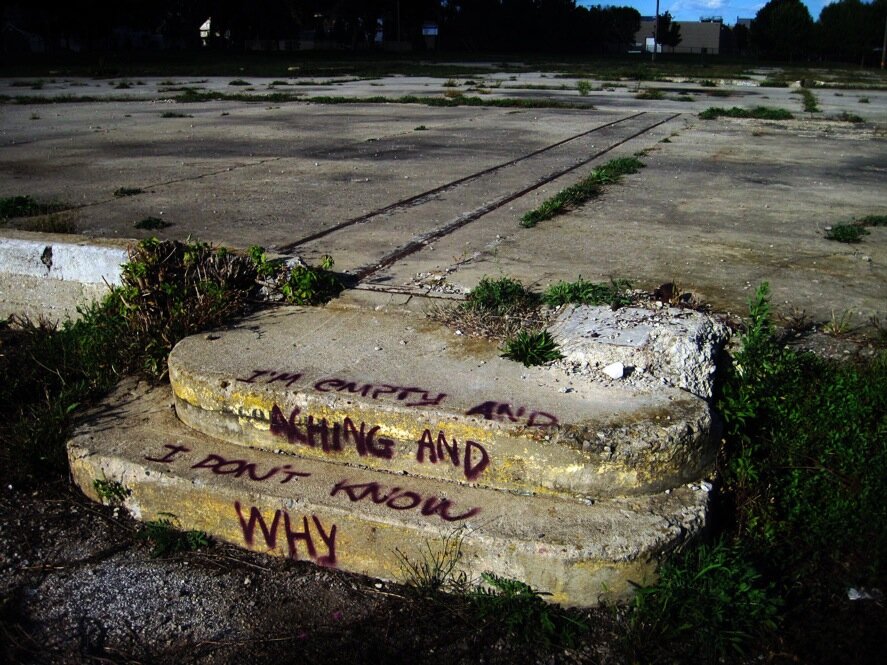 The story is about Eric Schantz, a mural painter from Saginaw, Michigan.

Heĺd grown up in Saginaw to a dying community. As the General Motors plants closed down, so did his hometown. He left Saginaw to attend college in Kansas City.

Upon his return, he missed the town where he grew up and wanted to help.

So he and a bunch of his buddies started a guerrila art project called Paint Saginaw, where theyĺd paint boarded up buildings with the lyrics from Simon and Garfunkelĺs America.

Their goal: breathe some new life into their hometown.

So I started looking online at houses in Boulder County, Colorado.

I quickly learned I could never afford a nice home in Boulder proper. Longmont, however, is just ten miles up the road and was still reeling from the housing crash.

A once-in-a-lifetime opportunity presented itself to me: I could buy my own home, fix it to my liking and start life fresh, losing all the patterns and problems that caused me to become restless and unhappy.

Fast forward five years: Iĺm happy in my little house. Iĺve become very active physically, lost a lot of weight, solved a slew of health issues and have gotten into the best shape of my life.

Thank you Eric Schantz for inspiring me.

Looking at my new home from the front. The place had been vacant for some time... and it's nice to see the lawn is starting to perk up.  I will need to hire someone to remove the stump at the right so I can plant a new tree.

Update: New photos taken 06/08/2011 and 06/15/2011 showing the lawn is really greening up.  When I bought the house I did not know there had been a sprinkler system installed.  The valves are located at the front and rear of the crawl space.  After replacing a few of the valves and sprinkler heads, tracing down the controller wire into the garage and installing a controller box, I have a fully functioning automatic sprinkler system.

Update: New photos taken 05/27/2012.  I thought it was time to do a major update to the page to show many of the things that have happened in the past year.

04/01/2011: My brother Dave and I spent the afternoon building new gates across the driveway.  In years past, the driveway was widened and, along the side of the garage, a pad was laid for RV/Boat storage (the parents say "Yay!").  In order for the neighborhood children to retain all their fingers, it was necessary to fence in the RV pad (which also makes for more privacy when the parents come to visit).  There was already chain link and wooden fencing surrounding the rest of the back yard.

On a side note: All of the lumber and hardware for both gates, which span eleven feet wide by six feet tall, was brought home in my smart ForTwo.  I could have done it in one trip, but I took two, just to be safe...

May 2012: My parents were here from the 11th through the 20th with their antique camper.  I hosted much of the local family for a potluck barbecue Mother's Day feast on the 13th.

Foot-Foot (my car) easily fits into the single-car garage.  There is ample space in front of my car for the table saw, storage for all my tools, and an area to tinker.  If you look closely at the back of my car, you can see I already have Colorado license plates.  I already have a Colorado driver's license as well.

Colorado: You're stuck with me.

Continuing through the back garage door, is my patio.  Bessie and Miguel's aviaries fit nicely outside my bedroom window.

After a fairly hot August, 2011, where I routinely had to bring the birds in early, I decided to look into shade for my patio.  In early September I found a company in Missouri that makes durable and affordable shade sails that would fit the patio perfectly.  By the middle of the month, they finally had shade... just in time for fall.  The picture was taken mid-morning.  The patio is completely shaded by early afternoon.

R2 has taken to enjoying her days on the patio with Bessie and Miguel.

May 2012: The aviaries are now pushed together.  As an experiment, I thought it would be nice if Bessie and Miguel, who are both very social birds, would enjoy being closer together.  I was right - many times I'll walk out onto the patio and find them sitting on their perches next to each other or playing together through the bars.


Spring 2012: Time to start some outside projects.  This year's first: Fencing in the patio.

While I live on a quiet residential street, my yard backs up to a four-lane 55 mph parkway, with a bike path immediately behind the chain link fence at the rear of the property.  This has troubled me somewhat because all three birds do like to go out on the patio during the day.  I'm not so concerned about cars on the parkway, but those on the bike path have been afforded full view of the birds.

In the summertime it's not such a big deal because there are grape vines planted along the chain link fencing.  The vines, when leafy, block most of the view of the patio.  That said, there's probably been only fifteen days this winter that the birds didn't get at least a little time outside.

As you can see from the following pictures, the grape vines do okay sheltering the yard from prying eyes.

While Longmont is pretty much a safe community, I don't want to be tempting the birds' fate.  I'd rather err on the concept Out of Sight, Out of Mind.  Why tempt temptation?

It made no sense to me to install a privacy fence along the rear of the property because my only use of the back yard generally involves mowing.

So I decided to fence in the patio.

An added bonus would be more privacy for me and a little bit of a sound barrier from the parkway.  I do like to sit on the patio with the birds and feed my many (now) pet squirrels.

At the back of the property is a ten by twelve-foot storage shed.  Currently I have no use for this space, but you know how it goes... where there's space, there's junk accumulating.....

Let's Go Inside and pay homage to The Oranging

June 2011: There is a central load-bearing wall running through the house from front to back.  It has been painted Orange Flame on both sides... in every room where it occurs.

Most who know me know that I like bold, saturated color.  Most every place I've lived has had at least one room, wall or ceiling that's been saturated with color.

Nancy, my sister-in-law, remarked it was time to leave my print on the house now that all the major projects have been completed.  This last week was The Oranging of my new home.  The original photos on this page have been replaced to reflect this phenomenon.  Mulder and Scully have been notified.

On October 10, 2016, I finished my most major project on the house to date: Distressed Hickory Hardwood Flooring in the kitchen, living room and hall.
Prepare your retinas as you begin to scroll further down....

The kitchen and bird room.  I have no use for a dining area.  The space is perfect for messy birds.

The living room.  There's a nifty cut-out between the living room and the kitchen.  Update 02/03/2012: Where the orange picture above the sofa now hangs, there had been an old evaporative cooler.  It was covered with a big white wooden box and looked totally out of place.  I took it out the last week in January.  The house has central air, so it was not a necessary appliance.

The scar on the outside of the house from the removal of the evaporative cooler.

The bathroom (you're directed by the art to the appropriate place to pee).  There is a large closet next to the vanity for my new washer and dryer.  There's a smaller closet between the bathtub and toilet for the water heater.

I did another big update the summer of 2016.  I ripped out the bathtub and replaced it with a shower.

It took me a while to fully understand the history of this house.  It's been flipped twice and, as a result, has been extensively modified from it's original floor plan.  Originally there was a passage in the back corner of the kitchen that led into a laundry and mud room, which had a door into the garage.  This room has been combined with the bathroom, making for a much larger space.

The original bathroom was quite small and didn't have a window.

The only drawback: I don't have a door into the garage or back yard from inside the house.  So far I really don't see any issues, other than it's a bit of a walk taking the birds to their aviaries.

My first-ever room dedicated to being an office.

My bedroom.  The bird's aviaries are outside my bedroom window.

Another update February 15-18, 2017: I ripped out the carpeting in my bedroom and replaced it with more of the engineered hickory hardwood flooring, leaving only the guest room and office with carpet.


There's one more room. I intend for the back bedroom to be a guest room when I have visitors... and a quiet place away from the birds to relax and read when I don't.  The Oranging didn't leave the hall so dark as the photograph would indicate; the hall doesn't photograph well.

Yes: I put a very large sofa-sleeper in the back bedroom.  The delivery guys from the furniture store abandoned it in the living room, insisting there was no way they could get it down my narrow hall and through a sharp doorway to the right.

Unfortunately... they were right.

I took the innards (bed part) out, thinking I could stand the sofa on end and move it down the hallway and through the door.

I managed to get it down the hall by myself okay... after taking down all the pictures and lights in the hall.   But, when it came to the doorway... there was no way...  Standing on end, it was a few inches too tall to fit through the door.

I ended up spending hours pulling out mountains of cushioning from the sewn-on back pillows and armrests.  I pulled hundreds of staples holding the fabric and padding onto one arm of the sofa.  I then took my reciprocating saw to my brand-new piece of furniture... cutting one arm completely off (the sofa that is... not me).

The sofa then easily fit through the doorway standing on end.  Reassembly was accomplished with wood glue, a number of metal mending brackets and screws... and not quite as many staples to reattach the padding and fabric.  I muscled the bed part down the hall (also standing on end) and reinstalled it.  I ended by re-stuffing the pillows and armrests and touching up the paint in the hall.